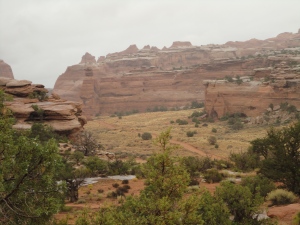 It is about thirty-three miles long and 10,000 feet of ascent. I love Moab so; it was a perfect race for me to start running ultras. Red Hot is not an easy 50k. It is along the slick rock trails around the city. In 2009, there was two feet of snow on the high plateaus, which was unexpected. The snow had been turned to powder by the front-runners, so for us mid-pack runners, it was like running in fluffy sand at the top of the plateau. I slipped nearly falling with three or four other runners right on my heels and a one hundred foot drop on my right. We descended to a dirt road, winding us around to the next climb. Gold Bar is the highest point of the race and a brutal climb. You have to reach it by 12:30 p.m. or you will be disqualified from the race.

From Gold Bar, the trail descends on the petrified sandstone mountains called slick rock and then back out on a dirt road. Then it’s a roller coaster ride up and over petrified sand dunes that require a running start, with hands on the ground in front of you to clamber up to the top. Runners chug along a lazy winding dirt road overlooking the white and pale green hills for three miles. We slowly lowered our bodies through rock crevasses down onto next boulder and into a sandpit and narrow canyon. The race finishes by taking runners down a rock strewn switch back road in Pritchet Canyon. Runners ride buses back to the starting line where their cars are parked.

The following year, I went back to run Red Hot wanting to improve my time and enjoy the challenge and beauty of the course. I had convinced J$ to come along. The week leading up to the race was not kind to me. I was vomiting. The Friday before the race, I felt much better, but was not at the top of my game and decided to drop to the 25k distance at packet pick up. The 25k is the first 2 miles and last 16 miles of the 50k.

Race morning was incredibly windy and greeted us with blown over port-o-potties. Out on the course we were saved from the wind while down in the canyons, but up on top at Gold Bar it was howling. J$ and I made it well before the cut off and began the descent.

You have to pay attention on the slick rock because you have to pick up your feet despite descending at a steep grade. I caught my toe and rolled ten feet down the rock face. The fall scared J$ more than it did me. I rolled right up onto my feet, and he started looking me up and down checking for damage, but I was ready to move. I laughed, said I was fine pushing away his hands, and we continued the descent. Fair warning to those captivated by the beauty of red rock cliffs, you have to keep your eyes on the trail.

After the climb to Gold Bar, the descent, and roller coaster sand dunes, Jeff asked, “Does it ever level out?”

“Yes, there is about a three mile dirt road coming up I swear.”

We kept running and Jeff became convinced the flat road was an illusion. “You must have been hallucinating. Were their unicorns on this flat road?”

Six years later, I’d like to think that I am in much better condition and could crush my eight hour finish on the 50k course from 2009. Red Hot may have to go to the top of the list for 2016, perfect way to open the season.