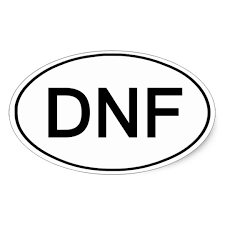 At some point in an ultrarunner’s career there will be a DNF, Did Not Finish. They happen for many reasons. Regardless of the reason, in the moment, it feels like an absolutely legitimate reason. Then there is the next morning, where you’ve slept and eaten a real meal, at that time, your reason for pulling out of the race may feel like the wrong decision.

It’s hard not to beat yourself up over, what you see as, a less than adequate reason for the DNF. And maybe some self criticism is warranted, doubtful but maybe. The problem is it gets you no where. It doesn’t help you improve. It doesn’t make the DNF go away. It doesn’t make you feel like getting back out there.

I have three DNFs. All three of them were in the same year! The first was at the Speedgoat 50k. My dropping from the race wasn’t voluntary. I missed the cut off by five minutes. The second was at my first 100 miler, Pony Express 100. I went into the race injured. I had rolled my ankle 5 weeks before and then proceeded to run on it for a relay run for 50 miles. I couldn’t let my team down and knew when I chose to do the relay, I was putting my 100 at risk. At mile 75 of the 100, my knee was so painful I could barely walk. I decided it wasn’t worth risking a long time injury. My last DNF was at Buffalo Run 50 miler. I pulled out 12 miles from the finish with mild hypothermia. I had stayed in an aid station waiting for warm broth. During the time I was there my body temperature dropped, since I wasn’t moving. The next morning I went out and finished the last 12 miles.

It sucks to get a DNF. I remember each of these very vividly. I did beat myself up after each and everyone, especially the Buffalo Run 100. After sulking for a week, I decided I was done and I was going to learn from each of these experiences. I went back and asked myself several questions about each.

What could have prevented the DNF?

What can I do to include these prevention strategies in my training in the future?

Ultimately, I decided two of the three could have been prevented. I realized my training for Speedgoat was not what it should have been to make the cut off times. For Buffalo, I learned to never stay in an aid station for more than what is absolutely necessary. I talk to my crew about this every time. I also learned how to better educate my crew and how to pick crew who will throw me back out into the cold, even if it’s a blizzard.

You can look at a DNF in two different ways and you’ll likely see both in each DNF you have beginning with the Did Not Finish and concluding Did Nothing Fatal.