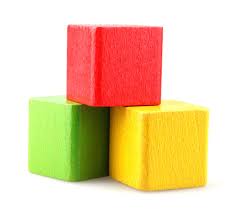 We all get stuck in a rut, but it can be really easy to do with your workout routine. I know I’m guilty of this on multiple occasions, with both my running and with my strength workouts.  There are a few problems with the rut: first, you don’t make any progress; second, you lose motivation; third, it’s boring!

The first is the most important for runners who want to improve. Not all runners want to improve. They are content running their six miles four days a week at a comfortable pace. That’s not me. I want to get better and I like to see progress. Even if improvement isn’t your think, staying motivated to get out there and not being bored the entire time should be enough for you to want to change things up every few weeks.

Many runners work through their training in blocks. Blocks can be four, six or eight weeks long and during each block you focus on a different aspect of your running. That doesn’t mean you drop other aspects of training, they just aren’t the focus point. Other runners switch things around by every other week. And still others, do a rotation over a ten-day period.

Strength Blocks: Starting a block rotation with strength is great because the number one goal of strength training for runners is to reduce risk of injuries. There are three types of strength training typically used by runners. First is body weight. This uses light weights or no weights with high repetitions. The idea is it builds strength and stability without the mass. Second is plyometrics. Plyometrics are explosive movements, such as jumping and springing. These are great but need to be implemented in small dosages especially at the beginning. Third is heavy lifting. Heavy lifting is low repetitions and max weight which strengths your connective tissue. Lifts should be done very slow and controlled. You’re runs during a strength rotation should be lower in intensity because you’re kicking up the intensity with strength training.

Speed Blocks: during your speed block you’re going to have an intense speed workout once a week and then throw in some fartleks during your long run. For your weekly intense session, choose different types of work outs. Don’t just do 800s. There’s nothing wrong with doing a week of 800s, just don’t make it an every week thing. Use pyramids, tempo runs, ladders, or 400s.

Hill Blocks: during your hill block you will have one run a week dedicated to running hills and then you’ll throw in extra hills for your long run. You can run hill repeats or find a long steady climb to conquer. If you’re doing short repeats, walking the downhill is fine, but you’ll have to find some longer downhills to practice downhill running. Downhills will tear up your legs if you don’t build them into your training.

Build Blocks: As endurance runners, especially at ultra-distances, your long run is going to stay in the weekly rotation. However, if you’re not doing a build phase, you’ll only do one long run a week rather than the back to backs. You can also choose to run one long run and then the next day a ten-mile run. But if you’re not in a build block, you’re not increasing the miles on that second day.

The important part is that you are changing things and challenging your body in new ways. Using the same workouts doesn’t get you more of the same results. It gets you a flatline. 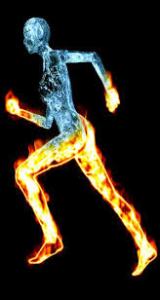 No I’m not promoting Burnie Sanders for president, but I do have to admit I like his ideas. Anyway, that’s about as political as this blog should ever get!

You know the burning in your legs when you run, especially, when you do speed work or hill/mountain climbs? Yeah, it’s a good feeling. It reminds you, that you are working hard and working on getting stronger.

The burn is caused by lactic acid buildup in your muscles. More accurately it’s the breakdown process that causes the burn. Your fast twitch muscles become more engaged when you run harder or your workout is more strenuous (hills or mountains). These muscles break down things into fuel more slowly because they don’t have enough mitochondria to do it at the same rate as you produce it. Read on to find out how to improve the breakdown.

What is lactic acid? It is a byproduct created when we burn glycogen (sugar) without oxygen as we run. The harder you run the more your body produces. The more you push past your limits the more your body produces. Your body breaks the lactic acid down into lactate and hydrogen. Then, your body uses the lactate as fuel. So, the culprit is the hydrogen ions. The hydrogen makes it hard for your muscles to contract, which causes the muscles to burn and running to feel more difficult.

Lactic acid does not cause soreness in your muscles the day following a work out. It is absorbed by your body fairly quickly. The soreness is the result of microtrauma caused to your muscles when you push them hard (this is not a bad thing because they heal stronger).

You can teach your body to process the hydrogen more quickly and delay the onset of the burn. This is done by training beyond your lactate threshold. The lactate threshold is the point where your body has accumulated more hydrogen than it can process. The more frequently you push past your lactic threshold, the more you can delay that burn. You need to train at 120-140 percent of your lactic threshold (80-90% of max heart rate) three days a week for five weeks to increase your tolerance by 25%.

There are physiological and psychological benefits of increase your lactic acid tolerance. The physiological benefits include strengthening connective tissue, improving recovery times, reduced injury, raise the rate of protein synthesis due to increased muscle and blood oxygen levels, reduced muscle and nerve damage due to faster removal and recycling of the hydrogen ions.

The take away: the burn is good. Learn to love it. 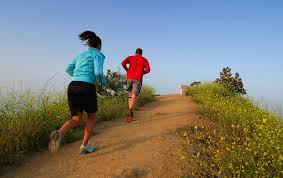 I hear it all the time, “I hate running uphill. It’s so hard. I feel like I’m going to diel, so how do I get better at running hills?”

Run all types of hills. Short and steep, rolling hills, and long gradual climbs. They each have their benefits.

Short steep hills build explosive power and strength as well as cardiovascular fitness. Find a hill that you can run up in 10-15 seconds with a grade of 7-10%. Between each repeat take a full 2-3 minute recovery before you go again. Repeat them 10-12 times.

Rolling hills teaches you to maintain your pace and form when going up and over a hill. You want to maintain the same effort on the up and on the down. This means your pace on the up will be slower than on the down, but it evens out over the entire hill. This strategy also reduces the possibility that you will bonk before the end of the run/race.

Long gradual climbs of a mile to a mile and a half builds endurance and mental strength. All runners know staring down a giant hill at mile 20 or 22 can be a huge mental challenge. Training to get up and over these giants will build your endurance and confidence.

You can also increase your ability to run uphill by making sure that you hold the proper form. Running uphill requires you to fight against gravity. The slope also causes you to land on your mid-foot and forefoot more. Your calves and ankles are under more pressure to propel you up the hill. The mistake many runners make when going uphill is too much forward lean from the waist this limits the power you will get out of your hips and knees. You can see this if you stand up and raise your leg standing straight and bent forward at the waist. Focus on standing tall and driving up the hill with your hips.

What about strength training and plyometrics, will those help? They will help, but nothing beats the actual running of hills for training benefits. Squats, jump squats, hamstring curls, and lunges both with and without jumping are all good ways to increase the strength of your legs for climbing hills.

How often should I be running the F***ing hills? It depends on your experience, if you have never run hills add in a hill training once every ten days. Monitor how you feel afterward and your recovery time. If you are recovering quickly and not sore more than a day or two, add a hill work out into each week. Experienced runners who have completed many marathons and have been training for more than two years and are not injury prone, can add in two hill training sessions a week. Elite athletes are running three or four hill training sessions a week, but they also train twice a day, morning and afternoon.