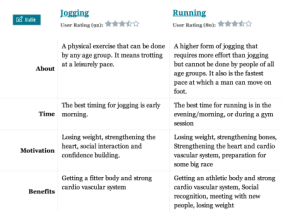 Do you run or jog?

Some people think of joggers as less than runners. I totally disagree. If you are out there moving your ass, you’re doing more than anyone sitting on their ass doing nothing. Pace doesn’t matter to me. What matters, is you are doing the best you can with what you have to meet your goals.

Most people who call themselves runners will be insulted when called a jogger. So there must be a difference between the two. In the not so distant past, many runners referred to “running” as jogging. In fact, Bill Bowerman who “jogged” with Arthur Lydiard in New Zealand wrote about titled “Jogging.” For those of you who are not familiar with Arthur Lydiard, he was a well known running coach who is credited with the popularization of running as a sport.

Dr. George Sheehan has been quoted as saying, “The difference between runners and joggers is a race number.” Dr. Sheehan is the author of “Running and Being: The Total Experience.

Garmin draws the line at 8 minute miles, which is their default setting between running and jogging on their GPS devices.

One of my favorite quotes, defines the difference the best:

“Running hurts. It always has. Woolly mammoths didn’t just roll over onto a plate and serve themselves up to prehistoric man with fries and a shake. They had to be caught—and running down a woolly mammoths was a bitch. Guess what? Running is still a bitch. But one with purpose. It teaches us that good things do not come easy. It teaches us that we are capable of more than we think. It teaches us that hard work will be rewarded and laziness will be punished. Don’t expect to learn those life lessons from running’s shiftless stepchild: jogging. Next time you suffer on the roads or trials, suffer proudly. It means you run like an animal.”—Pearl Izumi –

The difference between running and jogging is how you define yourself. For me, I’m a runner.