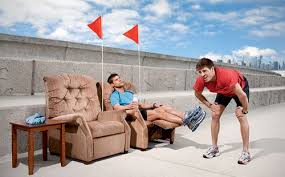 Many runners use the winter as their “off” season. They reduce their miles to a minimum base, but don’t stop running entirely. The off season allows your body to recover and gives you a prime opportunity to build strength in those supporting muscles.

You don’t want to stop running during the off season because you will lose all that aerobic fitness you have fought so hard to gain. You will also lose the muscle you have worked on building. The aerobic fitness loss happens within two weeks.

How many miles should you maintain? It really depends on your goals. If you plan to run an early season Marathon, it’s a good idea to maintain between 20 to 30 mile weekly base. For someone who runs 5k and 10k races, I’d suggest maintaining 15 to 20 miles as a base throughout the off season. You’ll want to throw in speed and hill training as well just to remind your muscles what they need to do.

Most runners use the colder months of the year as their off season. It’s just hard to get out into the cold, especially when it takes you thirty minutes to put on all the layers you need when temperatures are really cold.

There are a lot of things you can do to boost your running fitness during your off season. Strength training is an excellent way to prepare your body for the increase in miles as race season rolls around. Overall body strength is the most beneficial to runners, so don’t just focus on your legs. Your upper body maintains your running form in the late stages of a race. Poor form means poor energy efficiency. Hip strength is another place you will want to work on. Many running injuries develop from weak hips including shin splints, runners knee, and ITBand issues. You don’t want to build bulk just strong long lean muscle.

Team sports are another great choice. Most team sports require you to move forward, backward, and laterally. This lateral movement is going to strengthen those supporting and stabilizing muscles that get neglected during race season, but can really cripple you if they are injured. The team aspect is an excellent way to rebuild all of those relationships you let slid during your peak race season.

Other options, if you like the snow and cold, are snowshoeing and cross-country skiing. These work different muscles than running like your hips. It also keeps you in the outdoors, which is helpful for those with seasonal blues.

Other things you can work on during the off season are learning about different aspects of running, improving your food choices, implementing a foam rolling routine, and set goals for the next race season.

Take advantage of your off-season whenever it may be, relax and rebuild.

3 thoughts on “The Off Season”