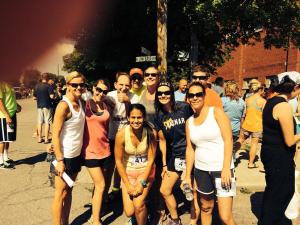 It was being a runner that mattered, not how fast or how far I could run. The joy was in the act of running and in the journey, not in the destination. We have a better chance of seeing where we are when we stop trying to get somewhere else.

My relay team is headed out this weekend to finish our 5th Red Rock Relay in Southern Utah.

Every team is different and each race is different. It is important to make sure that there are not major personality conflicts in the vans, which will ruin everyone’s fun. Personalities who may conflict should be in different vans on the team.

This is probably my number one rule about gathering a team. The first year I put together my team I mixed two people who should not have been mixed. We finished the race with smiles, but it was a little tense at times. When you are sticking six people in a van together for 24-36 hours, with limited sleep, aching legs and feet, and weird eating schedules every precaution should be taken to reduce friction least a fire spring to life from smoldering embers.

Communication between vans is crucial when you are approaching to a major exchange point (changing from Van One to Van Two’s six legs of the race). Text messaging and phone calls are the easiest form of communication. Text messaging requires less of a signal than phone calls making it my first choice for contacting the other van.

When texting my other van, I send the name of the runner who is running, what mile they are at, and their pace. We learned quickly that if you don’t put the time the text message is sent the information can be pointless. The text message can be delayed due to inconsistent service. Your message should be something like, “Swiss Miss is running, 13:00 pace, three miles to go. Sent at 9:00 p.m.” If you don’t include the sent time and they don’t have service until 9:30 p.m. they will think they have 39 minutes until the runner comes in, but in reality they only have nine minutes to get their runner ready to go and in the exchange shoot.

Putting in the time that the text is sent, eliminates this problem, so long as they receive it before you roll into the exchange point. As a last precaution, once the van reaches the “One mile to go” sign, the van should pull ahead of the runner and make sure the next runner is ready to start.

Relays are the perfect way to gather new runners into the sport and get them super excited to run.