Logo is property of Girls on the Run.

“It’s time to wake up Sky,” I said while rubbing his back.

“MMMM,” he moaned from under the blanket.

“We can stop and get hot chocolate and a cinnamon roll.”

At that, he began kicking the blankets off.

“What are we going to have to do?” he asked once we were on the road happily munching on a cinnamon roll.

He rolled his eyes. “Cow bells?”

“Yes, you can’t have a finish line without cow bells.”

We arrived at the Girls on the Run 5k at 7 in the morning to help set up our aid station filling cups of water and setting out thousands of granola bars on the table.

“How many runners are there?” I asked another volunteer named Lisa.

I smiled. This was going to be an amazing morning.

Girls on the run is a non-profit program for girls ages eight though thirteen and Sky and I were volunteering at their annual 5k event. The goal of the program is to “unleash confidence through accomplishment while establishing a lifetime appreciation of health and fitness.”

Everyone who ran the 5k was assigned the number 1 on their bib, because each of the girls is number one. The theme of the race was be your own superhero, the girls (and boys if they wanted to run a mostly girls race) wore florescent green capes as they ran. They had face painting and colored hair spray the girls could use to become a superhero before the race began.

The aid station Sky and I were assigned to was actually a pre and post-race station. When we arrived there and I realized we were on the wrong side of the finish line, I was a little bummed because I wanted to see the girls race past with the green capes streaming out behind them, but I smiled and handed out water asking them what their super powers were.

I was really impressed with the number of parents who were running with the little girls both mothers and fathers were out there with their hair and faces painted too.

The race began at 9:00 in the morning with the firing of a blank out of a gun. It’s a beautiful sound when the sun is rising over the mountains into a cloudless sky and you have 1500 superhero’s lined up at a starting line arch.

After they all run beneath the arch, it was empty in the pre-race festival area. Crickets chirped inside my head as I looked around at the green and pink balloons dancing alone in the morning breeze.

Slipping the medals over the heads of the red-faced sweaty girls as they came across the finish line was more amazing than I could have hoped. They laughed, they cried, and they won, every last one of them. 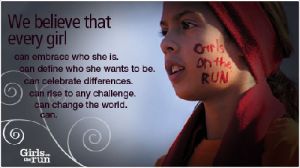