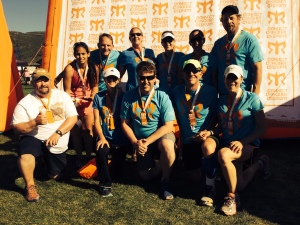 Rain? Who doesn’t love a little rain? I love the rain from the light sprinkles kissing my cheeks to the torrential downpour rinsing away all of my negativities. Thursday evening my van met and packed all of our gear into the trailblazer. It was a little snug with five runners, but we like one another. We went to Chili’s restaurant (team favorite) for dinner to avoid traffic and then drove the one and a half hours to Logan, Utah to camp for the night. One of our friends, Sherpa-Ben, set up a large tent for us at the campground where we were staying. As we pulled in and began unloading sleeping bags, the sprinkling ran began to fall.

Ben busted out his guitar and began strumming the songs Dust in the Wind by Kansas and Take Me Home Country Roads by Billy Vaughn . Justin had printed off the lyrics for everyone, so we all sang along. Just like our running skills vary so did the singing. Some who were better at running not so good in the vocal department and those who are not so great in the athletic neighborhood were amazing in their ability to serenade. The rain continued to pitter-pat on the outside of the tent as we quieted down knowing we would be getting up at 3:30 in the morning.

The alarm went off. Robert, Justin, and I extracted ourselves from the cocoons of our sleeping bags and rolled them and the sleeping mats up. Bebe and Mark continued to romp in dreamland for a few more minutes, but they too slunk out of their bags and packed up. First stop, coffee.

We rolled into the starting line at 4:00 a.m. the sun was not even thinking of peeking over the mountains yet. We pulled on our reflective vests, headlamps, and taillights.

Walking over to the line for the check-in, I told Robert, “It’ may take me about two and a half hours to run 15.5 miles. So be at the exchange by then, but be there early just in case.”

“Just follow the runners on the course, and you will get there. The course is well marked, and you shouldn’t have a problem. If you do the address is in the Ragmag (race magazine), and you can type it into a phone and get directions.”

More nodding of the head.

We moved from line to line collecting our orange safety flags, attending the safety briefing, getting shirts, bib numbers, goodies from sponsors, and the Ragmag.

I connected my bib to my race belt and handed my jacket to Robert as we walked over to the starting line.

At five in the morning, I was off with the rest of the early starting teams. It was cool about 55 degrees Fahrenheit.  I headed north out of the Utah State University’s track and up to some trails. This is new since the last time I ran this leg of the race. I climbed up and rode the roller coaster hills along the mountainside with a slight breeze filled with pine and sage flowing across my skin. I smiled and reached up to touch the trees as I bounded by. I love this. I flew down the descends with total abandon holding back my gleeful laughter only because the other runners would probably think I had lost my mind. I could not imagine being anywhere else. The sun peeked out between the summits of the mountains in the east and began to color the sky with pinks, oranges, and yellows.  The overcast sky made the colors more radiant.

I waved to all the early morning spectators and anyone else out on the street. “Good morning,” I called out. Every runner I passed or who passed me I told them, “Good job,” “Good Morning,” or whatever popped into my head.

I neared the first exchange at mile 6.3, and I could see the line of parked vans on both sides of the street. A crowd of reflective vested runners huddled around the orange and white striped markers for the exchange. The volunteer yelled out my team number as I was coming in and looked around for my next runner. As I reached the exchange I called out, “Ultrarunner.” And passed right through the exchange to hoots and hollers from the crowd.

The next leg was 8.2 miles. I cruised along through the neighborhoods of the small towns in Logan Valley, which is a farming community and college town.  The sun was coming up, but the clouds blocked most of the light and heat, which was fine by me. I knew that the longer the temperatures stayed low, the better my team would do. About four miles out from the exchange, the course followed the Top of Utah Marathon course out of Black Fork Canyon. The wind picked up as it coursed through the canyon. The high school cross-country team was out in full force running along the same road in the opposite direction. I cheered them on as they passed, especially the girls.

At the mouth of the canyon, I hit the last hill of this leg of the race. It’s daunting, and all the other runners around me were walking it. I wasn’t going to walk, I knew that the exchange and my team was waiting just a mile after this climb. The rain began to fall. It was perfect timing. Cooling my skin as my temperature rose from the increased effort. I reached the top breathing hard. I glanced at my Garmin. I was coming in hot, twenty minutes ahead of schedule. No problem, they know I could be early. I am usually earlier than I say during relays.

I reached the volunteer with the radio, who contacts the exchange volunteer to get the teams ready to go. I told her I was twenty minutes early and to yell loud for my team. Her eyes got wide, and she spoke into the radio. I was searching the crowd for my team. I couldn’t see them. I reached the exchange, and the volunteer was yelling my team number. I told her I was early, and she gave me her phone to call them. I called my van two because I didn’t have anyone’s phone number memorized in my own van (mistake one always take your phone with you on the relay run).

“Melissa,” I said breathless. “Call Justin, I’m twenty minutes early and don’t have his phone. Tell them to get over here.”

“Okay,” she said and we hung up. I waited (mistake number two: if they are not there don’t wait just go).

A few runners from the crowd laughed and said, “just run the next one.”

“I just ran the last two legs, but I will if they don’t get here soon,” I said. They looked stunned. “I’m twenty minutes early.  They will be here soon,” I reassured the crowd, volunteers and myself (mistake three: I continued to wait).

The time they were supposed to be there came and I told the volunteer I was just going to run the next leg and to let my team know if they showed up. Another friend of mine, who was on another team and waiting for her runner, tried to call Justin, but there was no answer (Mistake four: team members in the van with a runner out should have their phones on at all times and with them).

“How long is the next leg?” I asked the volunteer.

I put my ear buds back in my ears and headed out.  The leg was flatish farmland and neighborhoods. It was beautiful, and I love running through small towns. I turned off my headlamp since the sun was out and night time hours had ended at 630 am. My friend who was calling Justin pulled up next to me and asked if I needed anything, they were aiding their runner who was behind me as well.

“No I’m good, did you get in touch with Justin?”

I could see the next exchange in the distance and was hoping they got the message that I had gone on, if not I was just going to keep going until they caught up with me. I reached the exchange, and Justin was waiting there as the next runner.

“Sorry,” he said as I handed him the slap bracelet, and he started down the road.

“I’m so sorry,” Robert and Bebe said as I walked up to them.

“Don’t worry about it. I gotta pee.” I handed my empty handheld bottle to Robert and jogged over to the port-o-potties.

I didn’t care that they weren’t at the exchange. It happens. It’s not a big deal to me. Had it been one of my other runners out it would have been a major problem but it was me, so it was fine.

We went to the next exchange to meet Justin. While we waited for him, we watched vans sliding around in the mud to get out of the field where they had us all park (1000 vans go through these exchanges so it can get a little crazy).  There were some narrow escapes when vans fishtailed in the slippery mud nearly hitting runners, spectators, and other vans.

Justin came into the exchange and Mark went out. Mark had a long climb, Avon Pass, for 7.7 miles. The road was muddy, and the sprinkling rain was puttering out.  We stayed in the van as much as possible while we waited for Mark because I didn’t want a ton of mud in the trailblazer.

Bebe went out after mark. She ran 6.8 miles over the final summit of Avon and down into Eden. The first major exchange where we met up with Van Two.

While van two was out, we ate lunch and drove over to Snow Basin Resort where the next major exchange was. We wandered through the tents, slept a little, and waited.

At 6:15 pm, Erin came into the exchange and handed off the slap bracelet to me. I had fourteen miles to run.  I ran up out of Snow Basin and then down, down, down (2300 feet) into Mountain Green. I was running about a 7:15 pace coming down the mountain. Again, as I came to the exchange I called out Ultrarunner and went right through with cheers behind me. My fast pace caught up with me, and my stomach began to get grouchy. I told it to stop complaining because we were almost to the next exchange.  The temperatures were starting to warm up, and most of the clouds had moved out, which did not help my stomach feel any better. I ran into the exchange fifteen minutes earlier than predicted and handed off to Robert who was ready and waiting.

Robert ran five miles and handed off to Justin, who ran 4.2. Mark ran 4.2, and Bebe ran a monster climb up east canyon  8.3 miles. She did it in record time for my team (one hour and 40 minutes). The climb gets steeper as you get closer to the reservoir. Van Two was ready and waiting when Bebe came into the exchange at 10:30 pm.

We drove to the next major exchange point at Oakley Rodeo grounds and rolled out the sleeping bags on the ground. I slept about two hours before I was wide awake. I get nervous that I will not be ready for our van or I won’t hear when they text saying they are coming in.  Erin ran in and handed off to me at 6:05 am. I pumped out my last five miles in 40 minutes and handed off to Bebe (I switched some runners around since Robert missed his first run). Bebe completed 3.6 miles. Robert went out for two legs for a total of 14 miles. Mark finished with 3.9 miles, and Justin ran in Van One’s finish with 2.0 miles.

I love my team and am thrilled we have two more relays this year before the end of the season.

Nut up or Shut up!